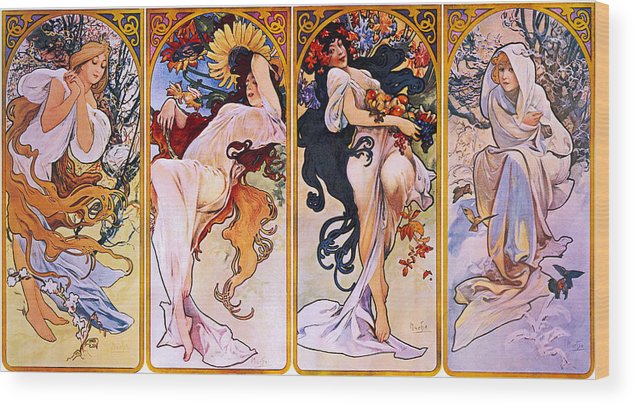 The Four Seasons wood print by Alphonse Mucha.   Bring your artwork to life with the texture and added depth of a wood print. Your image gets printed directly onto a sheet of 3/4" thick maple wood. There are D-clips on the back of the print for mounting it to your wall using mounting hooks and nails (included).

Alphonse Mucha The Four Seasons Print of four panels each depicting one of the four seasons personified by a woman, thought to have been printed between 1880 and 1910. Alfons Maria Mucha, often known in English and French as Alphonse Mucha, was a Czech Art Nouveau painter and decorative artist, known best for his distinct style. He produced many paintings, illustrations, advertisements, postcards, and designs. Mucha's work has continued to experience periodic revivals of interest for illustrators and artists. Interest in Mucha's distinctive style experienced a strong revival during the 1960s (with a general interest in Art Nouveau) and is particularly evident in the psychedelic posters of Hapshash and the Coloured Coat, the collective name for British artists Michael English and Nigel Waymouth, and Bob Masse.