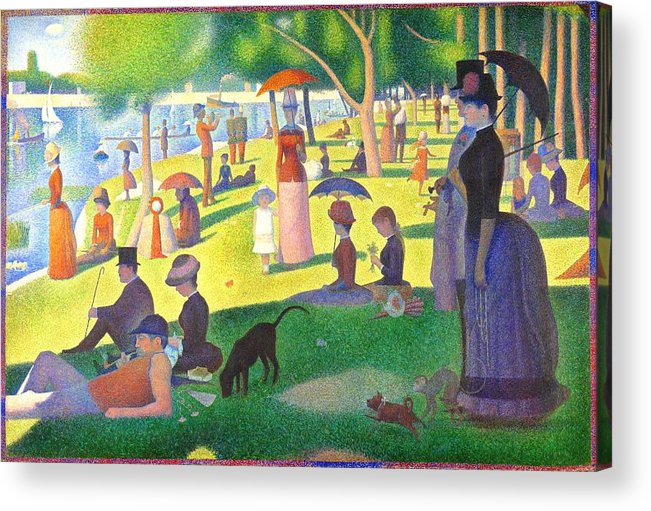 A Sunday On La Grande Jatte acrylic print by Georges Seurat.   Bring your artwork to life with the stylish lines and added depth of an acrylic print. Your image gets printed directly onto the back of a 1/4" thick sheet of clear acrylic. The high gloss of the acrylic sheet complements the rich colors of any image to produce stunning results. Two different mounting options are available, see below.

Georges Seurat A Sunday On La Grande Jatte A Sunday Afternoon on the Island of La Grande Jatte - 1884 (French: Un dimanche apres-midi a l'ile de la Grande Jatte - 1884) is one of Georges Seura's most famous works, and is an example of pointillism. In 1879 Georges Seurat enlisted as a soldier in the French army and was back home by 1880. Later, he ran a small painter's studio in Paris, and in 1883 showed his work publicly for the first time. The following year, Seurat began to work on La Grand Jatte and exhibited the painting in the spring of 1886 with the Impressionists.[2] With La Grande Jatte, Seurat was immediately acknowledged as the leader of a new and rebellious form of Impressionism called Neo-Impressionism. Seurat spent over two years painting A Sunday Afternoon, focusing meticulously on the landscape of the park. He reworked the original as well as completed numerous preliminary drawings and oil sketches. He sat in the park, creating numerous sketches of the various figures in...